Six Sentence Stories is a weekly writers’ challenge hosted by Denise at Girlie on the Edge. This week’s cue word is: DETOUR THE PSYCHOPOMP’S CURE I. Frightened, lost, running through the town, the pain inside me might have been scored by the pins of a voodoo sorceress, the blade of an assassin, the bullet of a sniper or the poison and spells of a high priestess.

II. Nyx was there to guide me, to point her ancient finger to an ancient detour; an old, old chapel on an old, old hill, where it’s whispered deep within lies the Psychopomp’s Cure. 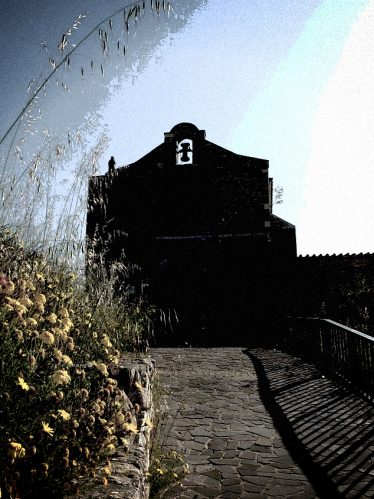 III. I moved through aisles, the fingernails of enemies scratching at the walls, until I came to a room which contained my childhood fears, and scattered ‘cross the floor were toys and games and jigsaw puzzles, the puzzle of my pain, human fragility nailed to the floor, like a carpet, a rug, I pulled it up, and there at my feet was a secret trapdoor.

IV. Down I went along rickety stairs, down, down until flung open were windows to the memories of first love affairs, teenage angst through a window pane, I clambered inside to reside for a while, and dwell upon what my heart laid bare, among the scatterthrows of promises, hope, and double dares.

V. I saw then a spiral staircase, leading back up to the worldly place, and at intervals I met my adult self, flanked by guardian races; for Annfred was there, Æthelflæd and Ælfwynn, and little Annan (who had saved me once before in dreams), and Michael with his sword and shield, and the Celtic triple-goddess Brigit, and of course Nyx was there at the topmost step, to point her ancient finger to a final door, Nyx… guardian of guardians and guide of all guides.

VI. When I re-emerged in the old, old, chapel, there upon an alter lay a goblet which I put to my lips to drink every last droplet,   as Nyx said – shhh, go to sleep, and when you awake all pain will be gone, to be replaced with the pain of healing… shhh… Nyx said shhh, rest now until your strength shall rise, like the morning sun from the darkness of night.

Editor’s note: My Six Sentence Story is written following an emergency surgery I had last week. Post-surgery, recovering in those first few hours after anaesthesia, I had some strange thoughts and sensations… funny, as they only come to me now with some clarity. The story-poem I’ve written features an emerging character called Nyx, created by my good friend and project collaborator Nick AKA Spira. Want to know more about Nyx ? Then read Spira’s tales here and here. The photographs used as illustration were taken by me on Tuesday during my morning convalescence walk. The scenes are from a 13th century hill, chapel and tower near where I live. And now… This… Just in! Breaking news…